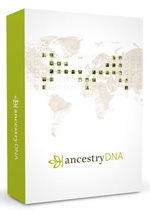 Arriving a few days early for Rootstech to get in some research at the FHL, I was met with the new technology and a greeter asking me if I wanted an ipad. Assuming she didn’t mean for me to keep, I said without hesitation, “sure”. But then I thought about it. I had my laptop. Why did I need an ipad? She told me to use the displays, I would have to use one of their ipads and sign in to FamilySearch.org to make use of the presentations. Here’s how it works: You sign in to Familysearch.org, and place the tablet into a docking station at one of the monitors on the wall. Whatever scientific cosmosis they have going on – reads your family tree from the ipad and displays the corresponding presentation, depending on what that station is designed to present. One is a relative finder. Similar to Ancestry’s app that came out last summer, this attempts to show you what famous people you are related to. I think the fun part of this is it can show you who else in the room you are related to, based on who had docked their ipad there earlier. One other attendee walked up to me, touched her picture on the screen wihere my tablet was docked and asked if we were related. We were! As she thought. However, I alerted her that my family tree at Familysearch.org was incorrect because, that’s another story. And so here goes…

When I first doscked my tablet, nothing came up. The “librarians” there to assist asked if I had my tree online. I couldn’t think of why I wouldn’t. I have been at this for many years and have made use of nearly every tool I’ve come across. Of course I would have my tree online. But no famous relatives could be found, even ones I knew I had. So I went over to a computer and logged in to Familysearch.org and whoa… I had four people in my tree. I asked if I could upload a GEDcom. I knew then that the staff were not Familysearch employees or even genealogists when one of the assistants asked, “what’s a GEDcom?” So for the next fifteen minutes I added a bunch of ancestors from memory, and watched them fill in automatically based on collaborative work by other users of the website. When I got to a particular ancestor I selected her name and watched the information fill in. No! the wrong information filled in. That’s not her father! I called over some help from the staff and after being referred to a more knowledgable person, he came over to the computer and we tried to figure out how to undo my link. Could not do it. Found that ancestor attached to the right father though, but this second user had her linked to a wrong husband! Oh… so now it’s coming back to me. THAT’s why I didn’t have my tree online at Familysearch.org.

Finally I just decided to go with it, wrong pedigree or not. I’d been at it for nearly an hour and I only had two days at the library. So I went to the relative finder and that’s when Mrs. attendee became excited that we were related, but it so happens that we were only related through the incorrect line. I said my apologies and hoped she didn’t think I was out to burst her bubble on purpose. Should I have kept quiet and let her enjoy the discovery? Maybe she would have had a better day, but I’m all about accuracy and sometimes it isn’t always necessary. Tell me what you think.

That being said, the pedigrees that link you to famous people are about as credible as the new subscriber who traces back to King Arthur in one night. I connected to Thomas Edison. But only in an instance where one of my proven ancestors was attached to Jno Smith who died two years before she was born.

The green screen was a cool concept, but did not really put me “in” the picture. The photo of a group of people dressed in 1800’s garb grabbed my attention, but as far back as I could stand against the wall, I still was not far back enough to look as if I were a part of the group. I was out in front of everyone else and a little larger in size. It didn’t look realistic.

There were a few other interactive displays, with mixed results. Depending on what information you give to the system, you may or may not have a better experience. I personally wasn’t impressed with the information provided, though I think the idea of making the visitor a part of the display is a smart step forward into the future of educational entertainment.